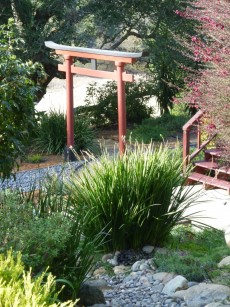 Several years ago I was invited to tour a beautiful garden in the hills above Scott Valley High School. Robby Frank was more than eager to share his techniques for gardening in deer country. He was also in a personal battle with gophers and moles and I affectionately bestowed upon him the title, serial mole killer. I am happy to report that Robby has won the war on all fronts. His garden is more lush than ever and with that comes the ongoing dilemma of saving water in the landscape especially in this time of drought.  He solved the problem by installing a Smart Irrigation Controller and has been so pleased with the results he’s on a Smart Irrigation crusade to educate fellow gardeners. Here’s his story.

We all know mulching is one of the ways to conserve water in the landscape. Robby has long been an advocate of composting and regularly renews the mulch in his garden. He even calls himself  “Mr Mulch”. He has permeable paths and a dry river bed that allow rainwater runoff to soak into the soil slowly. He keeps his plants pruned in a naturalistic manner because “smaller plants use less water'”. But all this wasn’t enough. His 3 “dumb timers”, as he calls them, were using too much water. That’s when he started researching weather based smart irrigation timers. 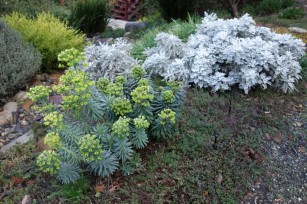 “To me it seemed like an easy way to conserve water and it’s better for the plants as well”, Robby said. “It will increase the irrigation times if the weather is hotter and dryer than usual,  decrease if it’s colder and turn itself off if it rains”. Robby was already familiar with the Rainbird brand of controllers although there are many other companies that offer them. That’s why he eventually chose the “Simple to Set” Smart Indoor/Outdoor Irrigation timer or Rainbird SST 1200s. 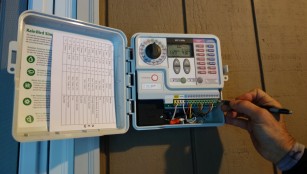 Scotts Valley Water District offers a Landscape Rebate program for weather based irrigation controllers and has a list of acceptable models on their website. Robby paid $165 online for his controller as he couldn’t find a local store that stocked them. Since then he has convinced the local Ace Hardware to carry them.  It replaced his 3 old controllers and he received a rebate from the SV water district for $100. San Lorenzo Water District has a similar rebate program.

To qualify for the credit, he arranged for someone to come to his house to take pictures of his old 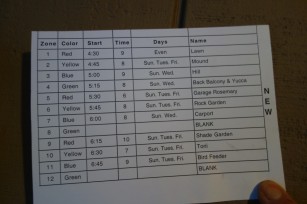 controllers. After installation they came again to see the new controller and he completed the necessary paperwork. The rebate credit which can vary from $75-$100 doesn’t cover the cost of the controller or installation labor and is determined by the type of controller installed. You can’t go wrong with saving water, money and getting a rebate, too.

The best part of the new system is how it saves water and is better for the plants.  The controller is never turned off. You enter your zip code and the watering schedule you prefer and the controller adjust the amount of water either up or down as needed. For instance, when it was dry before the December freeze, the controller watered his landscape at 20-30% of normal so the plants were not totally dry during that week and were better able to stand the extended freezing temps.

Likewise, the sensor can trigger the controller to irrigate 130% of normal if it’s exceedingly hot and dry. The controller, also called a timer, comes with 10 years of historical weather data for any US ZIP code and includes a rain and temperature sensor.

Robby showed me how amazingly easy it is to set up and program the controller. It’s called the Simple to Set irrigation timer and I agree. Because he propagates most of his succulents himself from cuttings, it’s easy for him to add a bit of extra irrigation on a one-time or sort term basis until they become established. He couldn’t do that with his old timer. It had to water the whole area on a valve the same. Now he has 12 zones that he easily programmed for just the right amount of water whether it’s several times a week or once a month.

Robby Frank is on a crusade to save water and Smart Irrigation is the way to do it. If you want to read more about how he battles deer and moles you can access the story I previously wrote about him on my blog by searching Serial Mole Killer. He would love to find other local like-minded gardeners to share stories.