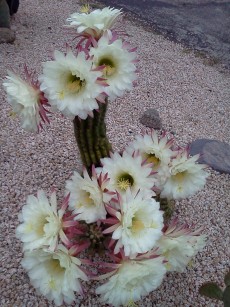 There are species of cactus that grow all over North and South America and have been naturalized in Africa, Asia and Australia. One type of opuntia, the familiar prickly pear, thrives just 700 miles south of the Arctic Circle, Professor Michael Loik told me as he gave me a tour of his cacti collection at his home in Felton. Professor Loik has lived in the San Lorenzo Valley for 18 years but it wasn’t until he and his wife moved to their present home in 2010 that he decided to combine his research, which focuses on the adaptations of desert and montane plants to light, drought, freezing and heat, to his own landscaping.

In his Felton front garden, Professor Loik grows 70 individual cactus specimens which represent 20 different species. He has a few succulents mixed in but says he is more fascinated with cactus. He told me that his love of this plant family started when he was 16 and saw some prickly pear cactus growing out of the snow in the Grand Canyon. “I was hooked”, he said. He ended up doing his PhD thesis on cactus adaptations from this early interest.

Professor Michael Loik is an internationally recognized expert on how plants cope with freezing and heat wave temperatures as well as rain, snowfall pattern and drought. He has done research in the Great Basin, the Mojave, Chihauhaun and Sonoran deserts, the Rocky Mountains, the Sierra Nevada as well as Costa Rica and Australia. With a weather station in the back yard, Professor Loik continues his research in his own front yard in Felton.

Standing among dozens of large prickly pear cacti, we spoke about all the colorful fruit they displayed. Those are actually a modified short 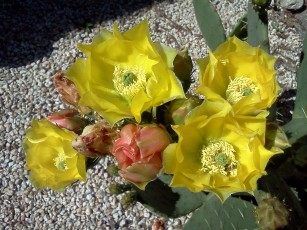 stem, he told me, and the large prickly paddle is really a long stem. The real fruit of the cacti is buried well within the flavorful pod.

At this time of year, none of the cacti were blooming but Professor Loik told me just a few weeks ago he had 11 blooms measuring a foot across on a Trichocereus pachanoi cactus. This species is bat and moth pollinated and has only a short time to attract a pollinator.

How does this garden grow? What’s his secret to keeping it alive and thriving in our area through drought and freezing?

When he first moved to Felton, Professor Loik took out the dying lawn and worked up the existing soil. After laying down weed block fabric he spread a 4” thick layer of course, well drained soil. Topping this is about 2” of half-inch California Gold crushed gravel. 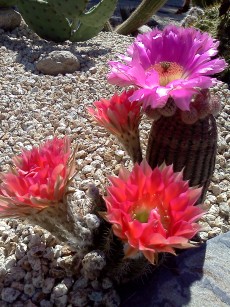 Professor Loik uses gray water from the laundry to hand water every week or so during the growing season of July to September. Cacti are use to this highly pulsed “rainfall” he told me, often receiving large monsoon rain periodically during the summer in their native range. He uses a liquid fertilizer occasionally during the summer.

Winter freezes affect only some of his specimens. Most of his collection are from areas of high altitude and can withstand our cold snaps. For those that are sensitive to freezing temps he covers them with towels and rags even soaking a towel with hot water to keep them even warmer during the night.

I had read that some plants produce chemicals that act like antifreeze but Professor Loik told me that according to his research “There is no particular antifreeze that we have identified. The plants that are tolerant of freezing where they live are able to withstand a certain degree of freezing within their stems (but outside of the cells). They are able to tolerate the loss of water from cells that goes along with extracellular freezing. Upon thawing, the cells take up the water they lost to intercellular spaces during freeze-dehydration.” 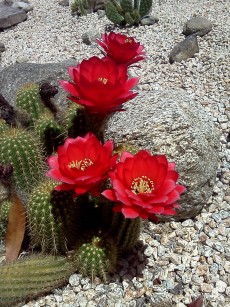 plants. These range from damage caused by ice formation within the plant itself which can cause cells to break open and even kill the plant outright. Freezing temperatures make cacti vulnerable to bacterial and fungal diseases especially in their roots. Third, freezing temperatures combined with bright sunlight can lead to “photoinhibition” whereby chlorophyll absorbs light but the rest of the photosynthesis machinery in the cell cannot process the energy and leads to something akin to plant sunburn.

I learned so much visiting Michael Loik’s cactus garden and hearing about his work. His long-term fascination with the stem shapes, flower colors and spine patterns of cacti is evident in his incredible garden.

All photos were provided by Professor Loik.