Dogs are amazing. They can do incredible things. Well maybe not my dog, Sherman, who is more likely to get into mischief than save mankind but we’ve all heard stories about detection dogs sniffing out drugs, explosives, cadavers and disaster survivors. In the mid 90’s, handlers started training them for conservation tasks such as sniffing out scat from endangered species and detecting trafficked ivory. Now their olfactory prowess is being used in the fight against invasive plants and insects.

It was my friend Cindy who told me about this latest use of detection dogs while we were walking on the beach. Her rescue dog, Sienna is obsessed with retrieving a ball thrown into the surf so she’d be the perfect candidate for a detection dog, assisting conservationists in the fight against invasive species.

Although I come across more French broom than Scotch in our area detection dogs can be trained to sniff out all invasive broom. They’re doing this in New York where Scotch broom is just starting to invade and land managers hope to eradicate it before it becomes widespread like it is here and all along the Pacific Northwest. Broom displaces native plants with thickets impenetrable to wildlife and changes the chemistry of the soil around it so that native plants can’t grow there. Broom grows quickly as it is able to fix nitrogen from the air giving a competitive advantage to other non-native weeds. It poses a serious threat to birds, butterflies and biodiversity. Broom contains a high amount of oil, which is flammable and increases the fire hazard. It’s also toxic to livestock and dogs depending on the amount ingested. And those are just some of the reasons why New York wants to keep broom away.

“Our field in the last 15 years has just exploded.” said Pete Coppolillo, executive director of the nonprofit Working Dogs for Conservation in Bozeman, Montana. The organization partners with government agencies, researchers and nonprofits on five continents to provide trained dogs and handlers for conservation projects. Besides helping to detect New York broom they have provided trained dogs to find invasive knapweed in Montana, Chinese bush clover in Iowa, yellow thistle in Colorado as well as invasive zebra and quagga mussels on boats here in California.

Working Dogs for Conservation trains shelter dogs for detection work, screening 1000 dogs for every one they put to work. To make the cut, the dogs have to be not only good sniffers and high-energy, but also seriously obsessed with toys so they’ll stay motivated to work for a reward – the chance to play with a ball.

Because I eat a lot of oranges and lemons I looked up recent papers to see if dogs were still being used to detect citrus greening disease. Sure enough what started 5 years ago with just a few dogs has increased dramatically and many dogs are now being trained. Tim Gottwald, a U.S. Dept. of Agriculture plant pathologist, said during a recent presentation in Riverside that dogs in Florida have been 99% accurate and in tests just this last December and February in Southern California backyards, they were more than 92% accurate even when distracted by the homeowners. Because dogs can actually smell the bacteria that causes greening disease within a few weeks after infection well before lab tests can confirm, their work is vitally important.

So when you’re petting “man’s best friend” tonight appreciate all the great things he does for you and for our planet. 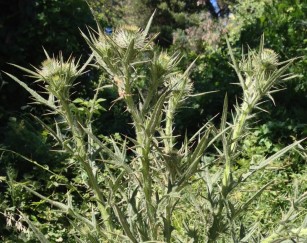 We can't control those pesky weed seeds that blow into our gardens and take hold. There are ways to keep them from taking over, however. But what about those invasive plants that are already in our gardens like ivy and vinca major? What's the best way to deal with them? Then there are plants we buy ourselves that can invade natural areas. Are there better plants to use that are just as attractive and useful? Here are some solutions to make your garden happy.

One invasive thug that can take over is bull thistle, a relative of the edible artichoke. The seeds of this vigorous exotic take hold in disturbed areas including your beautiful garden soil and if not controlled can become a solid mass of impenetrable thistles in just a few seasons. Bull thistle only reproduces by seed so removal of the flowering stalks at this time of year will prevent them from spreading. The flowering heads must be discarded in a plastic bag and destroyed to keep them from forming viable seed. Because this weed is biennial you also need to dig out the first year plants that have not formed stalks. You can also mow thistles close to the ground a couple of times before they form stalks to reduce the population over time.

As a landscape designer and consultant I'm often called upon for advice for an area covered with vinca major or ivy. Both of these invasive species are too successful for their own good, smothering native plants and harboring pests such as rats and snails. Vinca major also serves as a host to the bacteria that causes Pierce's disease in grapevines. For your information, vinca minor has not been found to be invasive in California so far

You can choose organic methods to control vinca and ivy rather than chemical herbicides. Hand 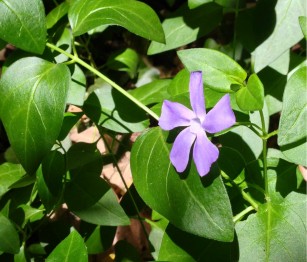 removal is labor intensive but the results are good if all the root nodes and stolons are removed. Work inward from the perimeter of the patch and pull the plants back. You will need to do this every 3 months during the first year to remove resprouts but native plants may recolonize the area and reduce the chance that other weeds will move into the area following the disturbance caused by the removal activities.

Some plants even though purchased from a nursery can cause problems. You wouldn't buy a Scotch or French broom knowing how invasive they can be. Forsythia, Japanese kerria, golden currant and Jerusalem sage all provide that beautiful spring butter yellow color in the garden.

The licorice plant (Helichrysum petiolare) gained popularity for its deer resistance and foliage color many years ago. Unfortunately, it self sows wildly and the spreading branches will root at any point of contact with the ground. Try instead better behaved plants like California natives salvia leucophylla or eriogonum giganteum. Teucrium germander or Powis Castle artemisia also work well in the same area.

Another good plant gone wrong is cotonester  lacteus (parneyi).  The red fall berries are spread by 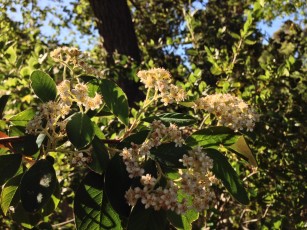 birds and with their rapid growth and competitive roots they can overtake the garden and wild areas. Fortunately there are many other plants to use instead that provide food for birds and are beautiful, too. Try planting toyon (Heteromeles arbutifolia) a California native with delicate white flowers and large clusters of brilliant red berries. Pineapple guava is another good substitute as is strawberry tree (Arbutus unedo).

These are just some of the suggested alternatives for invasive garden plants for this area. Don't give an invasive an inch, it can take over your garden, the neighbors and our wildlands.