I love it when a nice reader takes the time to call me to suggest a topic they?d like to see me write about or remind them what needs to be done at a certain time of year. Take Helen, who lives in Spring Lakes in Scotts Valley, for instance. Helen told me several years ago that she grows tomatoes in the summer and has 4 fruit trees including a satsuma plum, an espaliered apple and a tangerine. Helen battles peach leaf curl on her plum and coddling moth larvae inside her apples and would like to know exactly what to use and when to control these problems.

I know we?ve had a lot of rain which makes gardening and spraying difficult. You can prevent or control many diseases and overwintering insects by applying a dormant spray this month. This can be the most effective spray of the season. Fungal diseases such as peach leaf curl, fire blight, scab and anthracnose as well as insects including aphids, San Jose scale, bud moth, leaf roller, whitefly larvae, mealybugs and mites can all be controlled by dormant spray and horticultural oil.

There are several types of dormant sprays and all three types are considered organic. Lime-Sulfur or copper can be mixed with horticultural oil which smothers overwintering insects and eggs. This spray is good for all fruit trees except apricots which should be sprayed in the fall with copper and this month only with horticultural oil.

Apply dormant spray when the temperature is above 40 degrees. Make sure you cover every nook and cranny of each branch and trunk until the tree is dripping and spray the surrounding soil. Spray only plants that have suffered from pests or disease. Sprays, even organic, can kill beneficial insects as well. Even though they’re organic, dormant sprays can be irritating to skin and eyes, Wear long sleeves and gloves and eye protection.

Spinosad has been shown to suppress fungal diseases. Do this when the buds swell but before they open. Do not spray 36 hours before rain in predicted. Be sure to spray the ground around each tree.

Coddling moth control requires a different approach. The larvae of this particular moth is one of the few caterpillars that are likely to be found inside pear or apples. University of California Integrated Pest Management website has complete information about controlling this pest.

The bottom line for coddling moth control is the timing of insecticide spray applications, especially with newer, less toxic pesticides like spinosad. The coddling moth overwinters as full grown larvae within thick silken cocoons under loose scales of bark and in soil or debris around the base of the tree. The larvae emerge as adult moths mid-March to early April. To be effective your spray application must be timed for when when they are active.

Starting three to four weeks after bloom, check fruit at least twice a week looking for the first ?stings? or any mounds of reddish-brown frass. If you scrape the frass away you will see the tiny entry hole where the newly hatched larvae has just entered the fruit. Spray the tree as soon as you see the first sting after removing any fruit with stings as the insecticide won?t kill any larvae that have already entered the fruit. Coddling moths can have three or four generations per year.

According to the website, for most backyard situations, the best course of action might be to combine a variety of non chemical methods and accept the presence of some wormy fruit. Be sure to cut out the damaged portions because they might contain toxins generated by mold.

Outside of the historical agriculture exhibit at the Santa Cruz County Fair I have never seen so many antique farm implements and tools. Vintage tractors and parts were tucked underneath massive black walnuts. The winding driveway was dotted with more equipment, tractor wheels and parts. A storage shed displayed a collection of vintage chain saws and other small tools. California poppies bloomed in small clusters. I was here to visit an old friend in the hills above south Felton near the Toll House resort to see if I could help with advice about his ailing plum trees.

Al HIley has lived in this idyllic location since

he was a boy and that’s a long time as his 92nd birthday is this month. His father bought the 18 acres in 1906. The original house still stands shaded by a grape vine arbor that protects the door and windows in the heat of the day. He lives close by in another house where he enjoys a vista which includes Mt. Umunhum, the Summit and Boulder Creek. Al says he used to be able to see downtown Felton but the redwoods have grown since the late 1800’s when this area was logged.

I had to laugh that Al was asking me for advice. He’s been farming this land starting since WWII ended. His father p 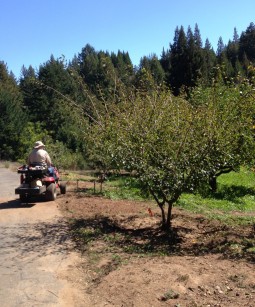 lanted the original walnut trees in the hopes of making a profit from his land but “he was no farmer”, according to Al. I glanced at the catalogs on the 12’ long redwood burl coffee table. You can tell a lot about a person from what they read. Strewn about were several tractor catalogs, Popular Mechanic magazines, Heartland cata

logs, miscellaneous tool catalogs and a book entitled ‘Chainsaws: A History” which touts to be the first book on the worldwide history of the chainsaw.

With his lab, Sonny, at his side, Al and I went out to the orchard to take a look at the fruit trees. Originally in the 1960’s he had about 95 fruit trees. He grafted different kinds of apples onto his father’s trees and planted peaches, and pears as well as plums and prunes. We passed the blueberry bushes which were starting to show some fall color. Nearby grew a fig with a gnarled trunk the likes I have never seen. Loaded with hundreds on hundreds of ripening figs he invited me back to pick some when they ripened.

Al couldn’t verify the exact variety of red apple that caught my eye. It also was  loaded with beautiful fruit. He 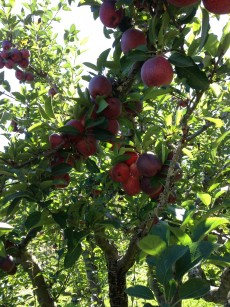 got me a bag to pick as many as I wanted to take home and they are crispy and juicy. He grows a yellow delicious apple also but after eating the red variety I didn’t think anything could rival them.

The plum trees weren’t doing as well. They all had some yellow leaves and golden colored sap oozing along the branches. This condition is called gummosis and occurs often in stone fruit trees like cherry, apricot, peach and plum. It can be caused by several very different things.

The tree may have gumming from a pathogen that invades and kills bark and cambial tissue through a wound such as a pruning cut, sun scald or hail. If you scrape the outer bark under the sap the dead phloem will appear cinnamon brown in color Prevention is the key to managing this problem. Keep trees healthy with optimal watering, mulching and nutrition. 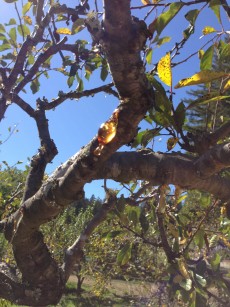 Borers can also cause gumming. In a plum tree, weakened trees or places where wounds have occurred will be susceptible. Ooze is often clear. Management of these pests is difficult and may include bark sprays during the growing season.

If you are not sure that a pathogen is causing the gummosis, scrape the outer bark away. If the inner bark is still cream colored and healthy, the oozing is caused by non-living factors and there is nothing you should do. If the wood is tan to brown, it is dead, and was most likely killed by a pathogen.

For my friend, Al’s plum trees I determined that the gummosis was caused by excessive irrigation. Due to the drought, Al had tried to limit watering during the summer. When he saw the trees being stressed he deep watered several times in the past month or so. The apple trees loved it but not the plums. He is happily going to deep water much less often until the trees go dormant.

I left Al and Sonny with the promise that I’d be back when the figs ripened. I’m sure I’ll be needing a fresh supply of apples, too.