According to Weather West, a California weather blog authored by climate scientist, Daniel Swain, the latest seasonal predictions do not inspire a great deal of hope that the coming winter will bring drought relief. “A substantial La Nina event no longer appears to be in the cards. If it’s present at all, it will probably be quite weak.” Seems that persistent West Coast winter ridge may just rear its ugly head again. Even if subtle shifts in the large-scale atmosphere pattern lead to a different outcome here, our persistent drought is still on the table.

More and more people are asking me to update their landscaping to use less water and be lower maintenance. Many want a more modern look and what could be more architectural and clean looking than a succulent garden?

Converting to a low water landscape requires careful planning and design to achieve the look you want. You need to evaluate drainage patterns, soil types, slopes, areas of sun and shade and building locations. Hardscape features, such as patios, paths and decks require no water to maintain and by selecting permeable materials such as porous pavers and gravel, rainwater can infiltrate the ground. Large boulders can be used as accents.

Next comes the fun part- plant selection. In choosing the best succulents for your garden think about if your area gets frost during the winter. Does it have protection from a building or evergreen tree or do you live in a banana belt that rarely freezes? Are you planting in sun, shade or a combination?

In addition to the hardy succulents like sedum and sempervivum many showy succulents need only a bit of protection during our winters. Aeonium decorum ‘Sunburst’ is one of the showiest species with spectacular variegated cream and green 10″ rosettes. It looks terrific planted with black Voodoo aeonium. Aeoniums do well in our climate as they come from Arabia, East Africa and the Canary Islands where winter rainfall is the norm.

Echeveria grow naturally in higher elevations of central Mexico to northwestern South America and so also do well in our our cool wet winters. ‘After Glow’ is frost tolerant and looks to be painted with florescent paint. There are spectacular hybrids being developed every year. These are not as hardy as the traditional hens and chicks but well worth the effort to find a place where they can survive a freeze. Frilly ‘Mauna Loa’ sports turquoise and burgundy foliage while Blue Curls echeveria looks like an anemone in a tide pool.

Aloes from South Africa and Arabia are old world plants. Many, like the medicinal aloe vera, are frost tender, but other such as the tree-like aloe plicitilis are hardy down to 25 degrees and look great either in the garden or in pots. Did you know the Egyptians used aloe in the mummification process or that there are no known wild populations of aloe? In South Africa an aloe called ferox is used in the same way as aloe vera for burns and stomach problems.

To ensure success when growing succulents, make sure your soil is fast draining. Our winter rains can rot even the toughest plants when their feet sit in soggy soil. Add sand, gravel or pumice to your soil or plant on mounds to increase drainage. 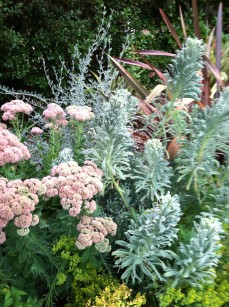 Front and center in the news and in your garden is the drought and what you can do about it in your own landscape. If you’ve dabbled before with replacing thirsty plants with climate-appropriate low water use California native plants or those from areas similar to ours this is the year to step up your efforts.

Gov. Brown’s mandate for water conservation state wide is a call to action to transform our landscapes into resilient gardens that not only save water but act to build the earth into a living sponge that harnesses rainwater and replenishes the aquifer.

Replacing that water guzzling lawn now that the kids have grown or dramatically reducing it’s size is a good place to start and is easier than you think. If you’ve been paralyzed with the thought of digging out and hauling away hundreds of square feet of heavy sod or using dangerous grass-killing chemicals, sheet mulching is the method for you.

This simple technique eliminates the lawn by smothering it with layers of recycled, compost and renewable materials. Here’s how to do it:

1. Mow the lawn down to 1-2”, leave the clippings in place and soak with a hose. Don’t worry. This soaking is nothing compared to what you’ll soon be saving by removing your lawn.
2. Flag the locations of sprinkler heads you will be keeping for your new plantings and cap off the ones you won’t need.
3. Add an inch of compost to speed up the decay of the grass. If your lawn borders a driveway, path or sidewalk you’ll have to remove about 3” inches deep of soil along these edges and back 8-12” so that the new mulch doesn’t slide off into the sidewalk.
4. Put down 2-3 layers of newspaper or one layer of cardboard overlapping the edges by 6-8” to prevent regrowth at the edges. You can buy recycled cardboard in rolls for larger projects or find your own at appliance or bicycle stores. Wet the cardboard or newspapers to keep them in place as you go along. It’s best to use cardboard or newspaper that will break down quicker. Weed fabric is not recommended as it takes much longer to break down. Don’t use plastic sheeting because water and air cannot penetrate it.
5. Add a 3” layer of mulch such as bark chips from a tree trimming company. You can use compost, straw or shredded plant mate 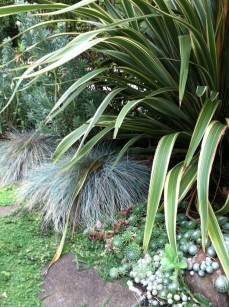 rial. If you have Bermuda grass or other weeds like oxalis you will need to layer about 8”of mulch to smother them.
6. Water thoroughly.

If you can wait a month or more to let the decomposition process get going so much the better. If you just can’t wait you can begin planting now by scraping away the mulch and poking a hole in the cardboard or newspaper where the plant is to go. Then add some compost to help the new plant become established. Be sure to plant high enough to prevent crown rot and keep the mulch a couple inches away from the stem. The top of the root ball should be 1-2” above the soil and just below the mulch.

Modify the sprinkler to drip and remember to adjust your irrigation system run times to accommodate your new plantings.

This is a basic “lasagna” method for lawn removal. If you are planning to replant with water smart grasses you would choose finer composted mulch instead of bark chips. Either way the process works on the same concept as a compost pile. As the lawn dies from lack of light, it decomposes with the activity of beneficial worms, insects and microorganisms coming up from the soil and doing their job to break down the nitrogen and carbon in the sheet-mulch layers. It’s a win-win situation for the environment and your water bill.