My plants are confused. Actually they know exactly what they are doing it’s me that’s confused. The mild winter, so far at least, has encouraged many of my plants normally still dormant at this time of year to start growing for the season. What’s a gardener to do when the roses, fuchsias, oakleaf hydrangeas and many other plants never really went dormant this year? Here are some February tasks that I’m going to be doing.

Cut back woody shrubs to stimulate lush new growth. Trim plants like Mexican bush sage and artemisia to within a few inches of the ground. Don’t use this approach on lavender or ceanothus, though. Lightly prune those after blooming later in the season and don’t cut back to bare wood inside the plant. 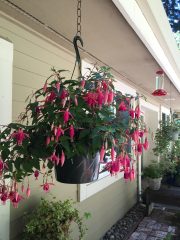 Prune fuchsias back by a third and remove dead, crossing branches and interior twiggy growth. Container fuchsias can be cut back to the pot rim. Do this right away if you haven’t already done so. A plant is wasting energy on new growth just to have it trimmed off later.

Cut back hydrangeas stems that bloomed last year and apply a soil acidifier if you want the flowers blue. Although aluminum sulfate is the traditional favorite for quickly acidifying soil it’s not as kind to beneficial soil microorganisms. Coffee grounds, pine needles, peat moss and cottonseed meal are better for your soil.

Don’t prune spring flowering shrubs like lilac, weigela and spirea or flowering trees such as cherry, plum and crabapple now. These and evergreens like rhododendrons, azaleas and camellias should be pruned after they flower. You can cut some branches while they are blooming to bring into the house for bouquets.

Even if you have pruned your roses be sure to remove old leaves still clinging to the plant even if the leaves look okay now. They will most likely develop fungal spots and diseases later if you don’t. Rake up any debris beneath the plant and discard to eliminate overwintering fungus spores

Roses are super forgiving and you can trim them up again using the following guidelines. The goal is to produce lots of roses not just a few of exhibition size. Aim for a vase-shaped bush with an open center.

Prune old garden roses that bloom once in the spring after flowering. Climbing roses require little pruning. Cut out extra stems if there are too many and also cut back long established canes to about the place where they are slightly thicker than a pencil. Then cut each side stem down to several inches. This will cause the cane to flower along its complete length for a beautiful spring display.

Wait to prune back perennials that may have their new foliage

damaged in a late frost. Same goes for shrubs that might have gotten hit by frost. That damaged foliage can protect the plant from further frost damage. Mid-March is the estimated date of hard frost in our area or at least it used to be. We gardeners are always betting Mother Nature will go our way and our efforts will not have gone in vain.

Cut back ornamental grasses if you live where you rarely get frost. I’m pruning California fuchsia, salvia ‘Bee’s Bliss’ and hummingbird sage now. They look okay now but I want the encourage new, compact growth.