There’s a chill in the morning air now. Several gardeners told me that their thermometer registered 32 degrees recently and there was frost on the pumpkin. Well, actually they said the white stuff was on their peppers but you get the idea. I’ve heard this saying for years so I looked it up and found some picturesque fall scenes described for gardeners and farmers a hundred years ago.

Thanks to James Whitcomb Riley who wrote the poem ‘When the Frost is on the Punkin’ we can picture the landscape in Indiana in the early 1900’s. Tall corn, when dry was gathered into shocks which were teepee like in appearance and tied at the top. Left in the fields 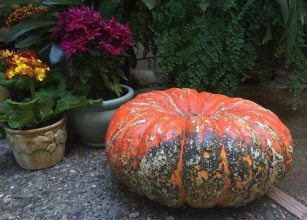 they were used as needed for livestock feed.

Pumpkin was a staple food for the early pioneers. It was easy to grow as a few seeds dropped into a shallow hole grew into a mature fruit. Yes, technically they are a fruit not a vegetable along with summer and winter squash and gourds. Their thick rind would allow them to be kept almost indefinitely.

Another stanza of Rileys’ poem describes an autumn scene not so different than our own gardens. Whether you grow apples and pears or a landscape for wildlife your garden is gently going to sleep now. Enjoy this time of year. Here’s the whole poem.

WHEN THE FROST IS ON THE PUNKIN
by James Whitcomb Reilly

They’s somethin kindo’ harty-like about the atmusfere?When the heat of summer’s over and the coolin’ fall is here -?Of course we miss the flowers, and the blossums on the trees?And the mumble of the hummin’-birds and buzzin’ of the bees;?But the air’s so appetizin’; and the landscape through the haze?Of a crisp and sunny monring of the airly autumn days?Is a pictur’ that no painter has the colorin’ to mock -?When the frost is on the punkin and fodder’s in the shock.

The husky, rusty russel of the tossels of the corn,?And the raspin’ of the tangled leaves, as golden as the morn;?The stubble in the furries – kindo’ lonesome-like, but still?A preachin’ sermons to us of the barns they growed to fill;?The strawstack in the medder, and the reaper in the shed;?The hosses in theyr stalls below – the clover overhead! -?O, it sets my hart a-clickin’ like the tickin’ of a clock,?When the frost is on the punkin and the fodder’s in the shock!

Then your apples all is gethered, and the ones a feller keeps?Is poured around the celler-floor in red and yeller heaps;?And your cider-makin’s over, and your wimmern-folks is through?With their mince and apple-butter, and theyr souse and saussage, too!?I don’t know how to tell it – but if sich a thing could be?As the Angels wantin’ boardin’, and they’d call around on me -?I’d want to ‘commodate ’em – all the whole-indurin’ flock -?When the frost is on the punkin and the fodder’s in the shock!