A friend of mine who attended Stanford University told me that the next time I was on the campus I should check out the famous Angel of Grief marble statue. Tucked in the trees behind the mausoleum that houses the remains of Leland Stanford, his wife and son, this statue was commissioned by Jane Stanford in honor of her deceased brother. It’s a duplicate of several others that are in places like Costa Rica, Canada, Luxembourg and Cuba and is actually the second on this site after the original was destroyed in the 1906 earthquake. 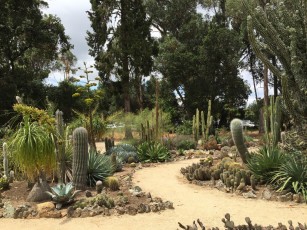 It is indeed moving to stand in front of this massive white marble statue. Nearby is a cactus garden that is equally impressive to this horticulturalist. Alive with hummingbirds and songbirds, the flowers hummed with activity. In these days of designing drought tolerant gardens I’m always on the lookout for tough plants that combine well making a garden a delight to stroll and enjoy. I came away with lots of ideas. Here are some succulents that would work well in a drought tolerant garden in our climate.

On a hot day, the color blue makes everything feel cooler. Plants with blue foliage or flowers can serve to calm a riot of color, connect different color schemes and make a space seem larger. One such succulent that serves this purpose well is called Blue Chalksticks or senecio mandraliscae. As a ground cover this beauty spreads 2-3 ft wide but only 12-18” tall. It’s very drought tolerant in full sun or light shade but will also tolerate regular irrigation and is hardy down to 20 degrees. The blue-gray foliage really stands out when paired with burgundy or pink.

Another favorite succulent that I like to use in drought tolerant landscapes is the Ghost plant which is a much easier name to remember than graptopetalum paraguayense. The colors of their 3-6” wide rosettes are what really catch your eye. Ranging from lavender blue to light pink and pale blue on the same plant, this colorful succulent will spread wide but only about 1 foot tall. It’s very hardy to winter lows of 20-25 degrees and will even rebound from being frozen if temps drop below that.

The Stanford cactus garden has milder winters than us so not all the plants there handle our cold and potential rainy winter weather. But another plant that does great in our climate is calandrinia grandiflora. Brilliant purple, poppy-like flowers rise out of a rosette of succulent gray-green leaves to make a colorful show from spring to fall. Beside being so showy- especially in a large group- this plants needs only very occasional water and is hardy down to 15-20 degrees. It’s super easy to grow and spreads quickly suppressing all weeds as it grows. Maybe that parking strip out front or bare hillside would look great planted with some calandrinia.

As I strolled through the many winding pathways in this cactus and succulent garden I was amazed when I came across a tree euphorbia taller than I. It really does look like something straight out of a Dr. Suess book. It would need a bit of protection here when temperatures drop below 25 degrees but if you like unusual plants this is the one you’ve got to have. Between the long yellowish-green leaves and the bunches of greenish-yellow flowers-really bracts- it’s a show stopper.

Besides the massive barrel cactus in the Stanford cactus garden, there are many, many varieties of aloe, agave, hens and chicks and yucca to name just a few. I was reminded by the huge Joshua trees of my years living in the Antelope Valley. This garden was originally planted around 1880 and many of the original historical plants are still there. Volunteer restoration work began in 1997 and is ongoing. With approximately 500 cacti and succulents it’s worth checking out if you’re in the area.