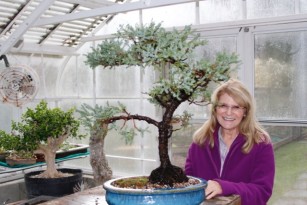 It all started several years ago at the annual bonsai show presented by the Santa Cruz Bonsai Kai Club. I was sitting in the front row watching the sensei (meaning teacher) finish styling an overgrown 5 gallon juniper into a breathtaking specimen. It was truly impressive with the branches suggesting a tree growing on a windswept hill. The raffle started which is one of the main fund raisers for the club. Of the many prizes offered the large specimen created by the sensei is the the most coveted. I sat and sat and sat as dozens of numbers other than mine were called and eager winners walked away with smaller finished bonsai, starter plants, pots and tools. But then the last number was drawn with much fanfare as this was for the giant creation. I heard my number. I was beside overjoyed not only because I never win anything but because this prize was so exquisite.

Fast forward to the present. With the 27th Annual Bonsai Show coming 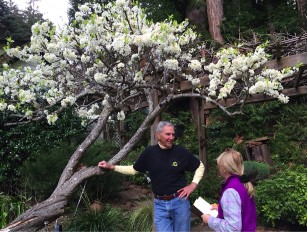 up I knew I would be asked how my specimen was doing. I hate to admit but I hadn’t repotted it as I should have and how do I prune the darn thing? So I sought out an expert in the Santa Cruz Bonsai Kai club to help me. Although it’s not difficult repotting a bonsai is quite different than repotting an ornamental shrub on your patio. I didn’t want to mess up.

Fellow Bonny Dooner and longtime member of the club, Ed Lambing was more than happy to show me his collection and help me with the repotting of my juniper. He even shared with me his recipe for the mix he uses which is usually a highly guarded secret by bonsai enthusiasts-on the same scale with “if I told you I’d have to kill you”.

Ed and Nancy Lambing have created a beautifully landscaped garden

that just keeps getting better with time. From the koi pond to the naturalistic rock swimming pool to the wisteria pergola everything looks like it has always been just so. At every turn Ed has displayed his larger bonsai on tree trunks and flat rocks. He also has a greenhouse for repotting and nurturing cuttings, a bonsai nursery where specimens are in training and a bonsai display area for his prized specimens that gets the best morning sun and afternoon shade. 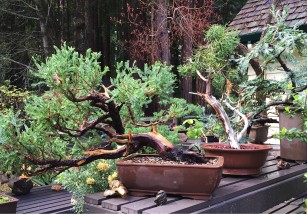 basic definition of the living art form. “Bon” means tray or pot while “sai” means to plant. Ed’s interest in this art form first started 30 years ago. He now has more bonsai than I could count. He has a California juniper bonsai that is estimated to be 400 years old based on It’s trunk diameter. It takes 100 years for this plant to grow 3/4” trunk thickness. Other trees in his collection include several very old and gnarled olive trees, citrus, shefflera, maples and elms to name just a few.

Back in the greenhouse we started to repot my juniper. Ed wired some small branches to create a more wind-blown look, eased my root-bound dwarf Japanese garden juniper from it’s pot and proceeded to tease the roots. Other steps ranged from wiring screen over the holes in the bottom of the pot to root pruning 2/3 of the root hairs- yikes- and then placing the trunk over gravel at the side of the new pot to mimic the effects of wind on the tree. Ed advised me that my tree was a good prospect for a root over rock or “Sekijoju” specimen in the future. I’ll need to find just the right rock for the upper roots to grip and look like they were exposed by erosion over a period of time.

After wiring the top heavy juniper into the pot. Ed added his special bonsai

potting mix and then used a chopstick to wiggle the mix down into the root ball to eliminate air pockets and compact the mix over the entire pot. Bonsai in America has thankfully evolved into it’s own style. I love the look o 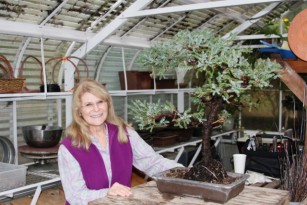 f the glazed pot I used when repotting my tree but traditional Japanese style would have used a plain unglazed one.

All the members of the Santa Cruz Bonsai Kai club are busy getting ready for their annual show. Each decides which of their specimens will be entered in the show, offered for sale or contributed to the raffle. Moss needs to be collected, the correct base chosen to complement each specimen, training wires removed, pots cleaned and polished.

Ed has a 20 year old Japanese Maple that he plans to show. It started life before he got it as a 5 gallon plant and has been in training ever since. Unfortunately, a beautiful wisteria which was just starting to bloom at the time of my visit will be mostly finished by the time of the annual bonsai show so won’t be there.

One of the reasons we all admire bonsai is how old they look. While some are actually hundreds of years old and handed down in families others just look very old and some techniques help further this allusion. Ed plans to show another California Juniper, this one 200 yrs old and originally styled by famed bonsai sensei “Mr California Juniper”, Harry Hirao. Using the “Jin” technique it has the illusion of even more age due to the weathered dieback of some branches.

Every plant sold or raffled at the show comes with an invitation to the monthly Santa Cruz Bonsai Kai club meetings where new enthusiasts are welcomed and nurtured. You can find out more by attending the 27th Annual Bonsai Show which takes place from 10:00 am to 5:00 pm on both Saturday, March 28th and Sunday, March 29th at the Museum of Art and History at 705 Front Street in Santa Cruz. Entry fee is $5 per person for the Bonsai Show and Museum.

Besides taking in the beautiful bonsai on display you can purchase breathtaking finished bonsai and starter plants as well as get experienced help with trees purchased. There will be door prizes and refreshments. You might even win the raffle for the demonstration specimen created each day at 2:00 pm by Bonsai Artist, Mike Pistello.