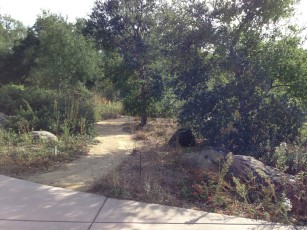 Call it a trick, call it a treat, but all gardens change with time. It’s part of nature for the fittest to survive. Now possibly you have different ideas of what you want your garden to look like but it’s hard to fool Mother Nature. Recently I had the opportunity to visit a special garden in the Gilroy area that has evolved with time. This garden of California native plants truly demonstrates how nature can decide the best plants for birds, butterflies, wildlife and people.

It was one of our classic mild autumn days when several fellow landscape designer friends and I were treated to a tour by the enthusiastic owner of the 14 acres of land called Casa Dos Rios at the base of Mt Madonna. Jean Myers loves to share her 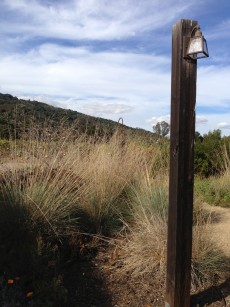 property and especially the journey that has transformed it from a formal landscape with lots of lawn to the present truly native wild garden. She loves that the landscape now supports all sorts of wildlife including birds, mammals, reptiles, amphibians, insects and fish.

A few of the native plantings have been more successful than she would have liked, Jean laughed as she pointed out the California Rose thicket has taken over the entry garden. She wishes she had planted the native wood rose instead which doesn’t spread as much. She plans to remove the wild rose eventually to make room for other native plants that aren’t so aggressive.

At this time of year a native garden is at rest. There’s a quietness to the landscape as the wind blows through the grasses. Large swaths of deer grass have naturalized. Originally, Jean planted many varieties of native grasses and some still remain but the deer grass have been particularly successful. Jean explained that this grass was used for making baskets by the Ohlone Indians that used to live in the area. To keep this grass fresh looking she cuts them back to 6 inches from the ground in late winter. 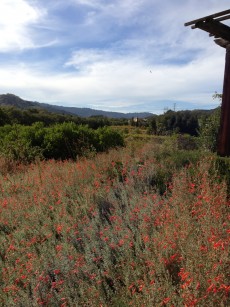 The California Aster was still blooming along the path as we made our way to the frog pond. This plant is well liked by the native moths and butterflies, Jean said, as it provides a late source of nectar. The lavender flowers make perfect landing pads. The two species of butterfly weed bloomed earlier in the season and had already spread their seed for next year.

The frog pond consists of basalt columns that drip water into a deep pool filled with rocks which cools the water in the heat of the summer. Jean said the area is usually alive with birds but they were keeping their distance during our visit. Lots of time for them to bathe later when we weren’t invading their space. She said Pacific Tree frogs and Western toads call the area home, too.

Another late blooming plant, the California Fuchsia, covered a slope alongside massive granite boulders. You could barely see the foliage through the hundreds of flowers of this red blooming variety. These plants spread easily and with a bit of late winter pruning look great late into the season.

Jean loves all her native plants. From the butterfly garden to the bog garden she has a story to tell about each

area. In the spring, Jean said, the native iris steal the show. She rounded up 600 of these from nurseries all over California when the garden was first planted. Grouping each type together she says was half the fun to keep the colors pure in each stand. I was amazed to see them in areas of full sun as well as part shade locations.

We picked late blackberries and raspberries as we walked around this amazing 14 acre property that benefits all wildlife. She is an avid birder and she and her husband manage two creeks, the Uvas and the Little Arthur that support hundreds more bird species, including bluebirds, swallows and owls. “There’s so much for them to eat here.” says Myers. She lets nature feed and attract all the native wildlife that visits.

It was a privilege to listen to Jean share her enthusiasm for gardening with California natives to attract wildlife and to conserve water. I left with my pockets filled with seeds from native wild grape and clematis so I’ll always have a bit of Case Dos Rios in my own garden.