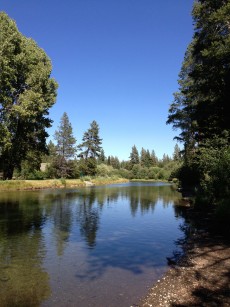 So far this year my travels have taken me up the coast of California and parts north. Then I headed a bit east to explore the Sierra Nevada. Statistics show that the drought is affecting all parts of the state. I’d heard that the Tahoe Queen had to modify it’s path around the rim of Lake Tahoe to avoid rocks. I had to check it out for myself. Just how low could that big blue body of water be? And what affect is the water situation having on the gardeners up there?

From the first glimpse of the Truckee river that is the sole outlet for Lake Tahoe I could see that the water was lower than usual. Still looked like enough water to negotiate a tube or small raft but the rafting companies have already closed for the season with the flow from the lake at only half of what it is normally in August. Hiking on the Tahoe Rim Trail next to the river was beautiful. The native plants and trees can exist even without the normal snowfall. They might not put on a lot of growth during dry years but they still looked healthy.

There is a chart at the dam where the Truckee river originates on the north side of Lake Tahoe. The graph shows that this is not the only drought event to have hit the Tahoe Basin. I was told the lake has been lower than this many times. Back in the 1930’s, 1962, 1976 and especially during the early 90’s the lake level dipped even lower. 2004 and 2010 were also low years. The lake level is just above the natural rim right now. The average daily evaporation rate of the lake is 397 million gallons.

In Tahoe City there is a destination nursery that I always visit when I’m in the area. In addition

to several acres of trees and plants, the Tahoe Tree Company’s grounds are beautifully landscaped. A small lawn in surrounded by perennial beds loaded with flowers and a gazebo bordered with Autumn Joy sedum was just starting to bloom. Stands of quaking aspen towered over the shade beds of hosta, begonia, astilbe and New Guinea impatiens.

I asked one of the employees about how the drought has affected their customers. I noticed that many of the local residents had bright green lawns surrounded by dahlias, rudbeckia and ornamental grasses. She told me that many water companies serve the communities around the lake. They get some water from the lake itself but the rest is from springs which are drying up. The Tahoe City Public Utility District recommendation is to reduce water consumption by 20% with watering on even or odd days depending on your address.

Changes this season at the nursery range from reduced sale of seeds because seeds need regular watering to get started. Also customers are requesting more native plants but I was told that some of those requested are high water usage plants like dogwoods and willows. Customers are mulching more and learning which plants are drought tolerant. Popular natives include Sierra currant, Bitter and West Sand cherry, Mountain spiraea and elderberry. 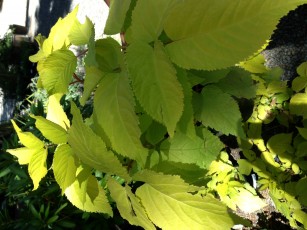 Strolling the grounds of the nursery a brilliant gold plant caught my eye. Morning sun shone on a group of Sun King aralia and I had to find out more about this beautiful plant. In mid-spring this fast growing, 6 foot plant emerges with bright gold leaves. In sun the foliage remains gold through out the summer. In full shade, the foliage will be chartreuse to lime green in color. Spikes of tiny white flowers emerge in summer followed by ornamental black fruit. This plant is deer resistant. It’s needs some moisture so combine it with other average water users in the same bed.

We are all hoping this winter will bring us some relief from the drought, even those who live next to that big blue lake.