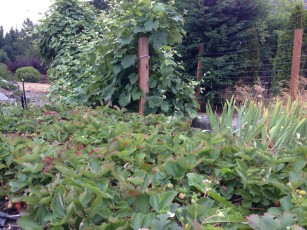 They live in a neighborhood of traditional landscaping. Large lawns surrounded by neat mounds of boxwood and foundation plants are the norm here in the Pacific Northwest. But Bob and Bev had a different vision for their 2/3 acre corner property, They wanted fruit trees, vegetables and berries in addition to flowering shrubs, perennials and roses and they wanted to grow it organically.

Bob and Bev live next door to my sister, Evan, on Fox Island. Located in the southern part of Puget Sound, the island’s weather and climate are tempered by the water that surrounds it on all sides. This is both a blessing and a curse. Strong winds, thunder, lightning and heavy rain in both the summer and winter are interspersed with idyllic sunshine and blue skies. You’d never know these challenges exist when you look at Bob and Bev’s garden. It’s spectacular.

Both love being outside. Bob was raised in the midwest and Bev on the east coast. Bev confesses that long ago she was more into zinnias and petunias and “didn’t get it” when it came to real gardening. They started creating the garden about 6 years ago with Bob designing the hardscaping and laying out the original beds and recirculating stream. They told me they “take one step at a time” in the garden so it seems it’s never done. Don’t we all know that feeling?

There are a lot of deer on Fox Island which has been an ongoing battle. Originally, after deer ate 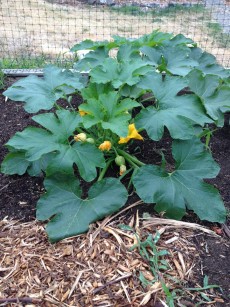 everything including the red-twig dogwood, roses, fruit trees and berries, Bob put up a short fence thinking it was enough of a deterrent. When that was less than successful, he surrounded the lower property where the edibles live with a 6 ft see-through fence topped with 2 wires slanting outward. “Works great”, Bob says although they have both see deer on their hind legs trying to pull down the fencing with their hooves. One time a young buck and doe got under the fence and it took several neighbors to help herd them out of the gate.

Wildlife is abundant on the island. They take down the 3 bird feeders nightly as the raccoons were tearing them down and demolishing them to get to the feed. On this morning a small flock of American goldfinches were enjoying a meal, the males displaying their deep, butter yellow breasts. They often hear coyotes closeby and 3 years ago a couple of bears swam over to the island from the mainland. “Are there foxes on the island, too?, I asked. Bev laughed. “No, the island was named after a British explorer”, she told me. The most aggressive animal they have ever had was a pheasant they named Phinneus. Seems he terrorized the neighborhood last year. He would land on their fence, jump in and chase Bev around the garden pecking at her legs.

It was predicted that the island would have a warm, dry summer but Bev told me it’s turned out they have been getting some rain. The strawberries are still producing as are the blueberries. The blackberries, which don’t normally ripen until August, are almost done for the season. “Climate change?”, Bev theorized. 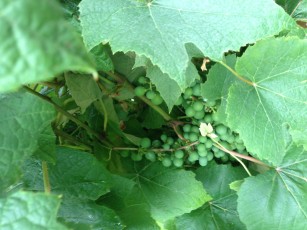 Bob and Bev’s grapes were still green but coming along nicely. They grow a concord-type grape and have good harvests in mid-September now that they allow the leaves to cover the clusters and hide them from the birds. The main vegetable garden is fenced to protect it from Delia, the dog, who loves to eat carrots right from the ground as well as some of the other vegetables. The acorn squash are growing nicely and new rows of beans have been planted and fertilized with worm casting juice.

With so much to see in this garden my head was spinning. The stories just kept coming about the successes and methods they have worked out to provide food for the soul as well as the table.

Next week I’ll tell you more about this wonderful garden on Fox island.