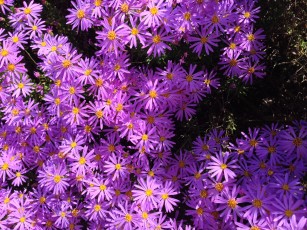 We humans used to be mostly foragers and obtained our nutrition before the end of the last ice age by being hunter-gatherers. According to David Christian in his book ‘This Fleeting World’, agriculture arose independently in multiple, unconnected areas of the world in roughly the same historic timeframe. Foragers, he says, lived comparatively leisurely lives with good nutrition, working just a few hours each day, while those in agricultural communities toiled almost ceaselessly and had comparatively poor nutrition. What happened to make us the agricultural society we are today?

Christian points out that the end of the ice age occurred at the same time that foragers migrated around the globe. Warmer, wetter and more productive climates may have increased populations in some regions with increased population pressure. It may explain why, in several parts of the world, beginning about ten thousand years ago, some communities of foragers began to settle down.

The rest is history. Many of us are returning to growing and producing our own food whenever we are able. Even on a small scale, a garden, a few fruit trees, a chicken or two or three, all help to put healthy, nutritious food on our table. 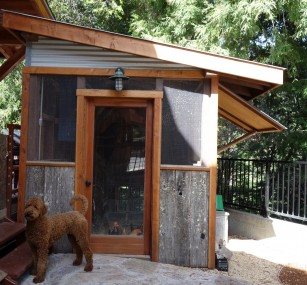 in with ornamental plants and fragrant flowers that attract bees, butterflies and other pollinators to the garden. Her “chicken palace” would be the envy of every chicken in the county. Annie, the dog, was more than happy to show me how it was made with boards from the old barn, new corrugated iron siding along with some new wood. Their palace keeps the chickens safe from predators and sheltered from the elements. The best feature is the roosting spot near the top which can be easily accessed from doors that 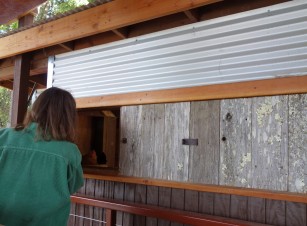 open at deck level to check for eggs. On this morning two of the girls were “working” so we didn’t disturb them.

Earlier in the week, I visited a garden where the only place available to grow vegetables was a little shady. Huge cottonwood trees shaded much of the area and even when thinned the trees would always block some of the sun. We decided she could grow cherry tomatoes that ripen even in part shade on the east side as most of the sun that reached the area fell from mid-day on. Also she likes green beans, so a bush variety would conserve space and not block the sun to other vegetables. There are so many bush beans available. She’ll pick from 8 different organic varieties available from Renee’s Garden Seeds. With mouth-watering names such as Royalty Purple, Tricolor Bush,
the favorite of gourmets, Nickel Filet, and the French yellow Roc D’Or she’ll have a hard time deciding.

Other vegetables that will produce without sun all day long include spinach, bush peas, kale, chard, lettuce and root crops like beets, carrots, potatoes and radishes. They may take a bit longer to mature without full sun so be patient.

I rounded out the week by visiting the UCSC Arboretum. Regardless of the time of year, 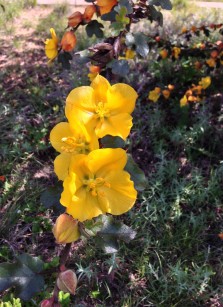 whenever I pass by this jewel of a garden I always stop by to see what’s blooming and what the birds are up to. I had dropped by in February before the rains came and was a little concerned that the December freeze compounded by the lack of rain had stressed the plants. They were in survival mode and it didn’t look like they were going to be putting on their usual spectacular spring display. It was happy to see that the rains came in the nick of time and everything was now blooming away. Vivid lilac, aster-like flowers absolutely covered some low shrubs.

California flannel bush or fremontodendron californium were covered with bright yellow flowerss in the California Natives garden. A low growing species that may have been Pine Hill from the Sierra was also in full bloom.  All 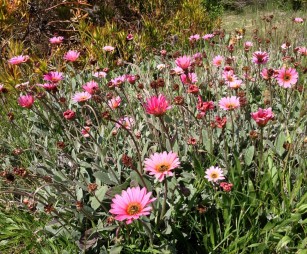 Before I left I also enjoyed a stand of arcotis-like pink daisies that bordered the South African and New Zealand gardens.  With no name tags to help me identify them I could only enjoy their beauty but then isn’t that what it’s all about?