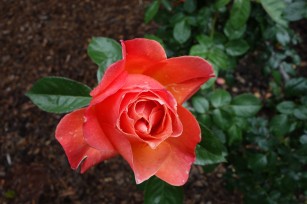 Surrounded by roses of nearly every color in the rainbow I smelled vanilla, spice and honey. The sun peaked in and out of the clouds allowing the vivid hues of the petals to change with the light. I was enjoying the garden of rose aficionados Mark and Lane Maloney of Scotts Valley. Among their 40 rose bushes I was to learn how an expert cares for these beauties.

The oldest roses in the garden are 60 years of age. Mark dug them from his mother’s collection when she died in Atherton 5 years ago. He starting collecting most of his other roses 20-30 years ago when he and Lane moved to the Scotts Valley property. Because he seldom has a rose die the only new rose in the garden is a double blooming red variety called Legend and named after Oprah. It was just starting to open on the day I visited this amazing rose garden.

I asked Mark which rose is his favorite. It was hard to pin him down to just one. The 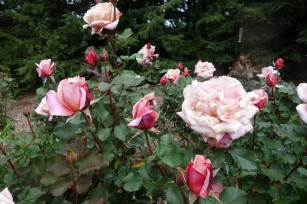 garden is divided into two separate beds. One bed is devoted entirely to roses while another blends roses with other perennials. I admired a large shrub covered with pinkish flowers and he replied “this is one my most beautiful roses. It starts out a deep dusty rose then fades to lighter shades as it ages”.  Most of the roses in the garden have large ornamental name tags that he purchased online. The sign at the base read Distant Drums.

I was drawn to the Double Delight as I know it’s one of the most fragrant. Another rose with an incredible scent is Dolly Parton but on this day it hadn’t opened yet. Mark described it as “big and pink”, which seems appropriate.

Double Delight, like many roses, blooms in cycles. They set buds and bloom for a month, rest for a month, then set another round of blooms. Mark said he usually gets about 3 cycles per season. One of his favorite roses will bloom all summer non-stop. Strike it Rich lives up to the name with lovely sherbet-orange flowers.

Mark also likes Black Magic with deep, reddish-black blooms that last 2 weeks in the garden as does another of his favorites, Fame, with pink flowers so bright they are nearly iridescent .  With deep yellow blooms Gold Medal caught my attention. But then I saw St. Patrick with those cool greenish-white blooms. Mark told me that in the white rose department he thinks White Lightnin’ is a beautiful rose as is the classic, JFK.

The roses in the Maloney’s garden are lush and healthy. What’s your secret I asked? Mark

smiled and handed me a Rose Garden Calendar he had prepared on his computer for me. In a nutshell this is how he does it.
Late December- prune heavily down to about 24″ tall.

March 1- fertilize and repeat each month through September.

Mark uses a systemic fertilizer which keeps insects at bay. He also uses an acid fertilizer once or twice a year as well as putting banana peels on the surface of the soil for potassium. I laughed when he told me his banana peel tip. I was nearly standing on a blackened peel with sticker still intact when he shared this info.

His other “secrets” include picking off diseased leaves regularly, pruning lightly throughout the year, mulching with several inches of chipped wood and watering with 1″ of water per rose each week applied in a trough  surrounding the shrub.

Mark is a member of ARS (American Rose Society) with he suggests as a good source of information and also rose recommendations for different areas and climates. He also maintains the roses at the Scott House at Civic Center. So when Mark talks roses, I listen.