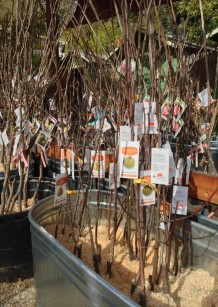 It’s bare root season again. There’s something magical about a small leafless tree with bare roots that will produce mouth-watering fruit when it grows up. Even ornamental shade trees, flowering shrubs like lilacs and vines like wisteria start out looking like twigs. Buying a new addition for your garden or home orchard in bare root form is economical. They establish quickly and are easy to plant. Every year there are more types available including delicious time honored heirloom varieties as well as modern favorites. It’ll be hard for me to decide which ones I’ll recommend for edible gardens I design this year.

A visit to Mountain Feed & Farm Supply in Ben Lomond has me inspired. They specialize in edible plants and trees as well as all things related to harvesting and preserving them.  Renee was eager to share with me her favorite fruit tree varieties.  Many of these delicious heirlooms are locally grown here in the Santa Cruz Mountains by Tierra Madre Farms who use organic farming practices to keep the trees and the soil healthy. I like the idea that this small farm is dedicated to promoting and preserving our world’s crop diversity.

When May rolls around I’ll be anxiously awaiting the first cherries, apricots and peaches. Then the early nectarines arrive, sweet and juicy followed by the plums that ripen next. Later in the summer apples, figs and pears make their debut as well as late ripening plums and peaches. With a little planning you can have fresh fruit 7 months of the year.

I’d never heard of some of the bare root heirloom varieties I saw buried in tubs of sawdust so I did a little research to find out what all the fuss was about. Why had they passed the test of time and then disappeared off our store shelves? By growing your own fruit you’re not at the mercy of mechanical harvesters and shipping practices. You can grow fruit and harvest it when the time is right. Homegrown fruit is a world apart from agribusiness.

Who doesn’t look forward to the first cherries of the season? Plant an Early Purple Guigne cherry and you’ll be the envy of the neighborhood. This heirloom has been grown in this country since the early 1800’s and figured in a court case in San Jose in 1884. Seems a Mr. Bassford  bought 300 of these bare root trees in December of 1897. When they fruited several years later he found that the cherries were quite different from the variety which he had paid for. Court records show that he claimed the cherries were inferior in size and appearance to the Early Purple Guigne that he had wanted and were nearly valueless to him on the market. He sued but lost his case after testimony revealed and Judge Spencer ruled that the name Early Purple Guigne applied to different types of cherries in different localities and the original bare root trees were not fraudulently sold.

Another early ripening cherry to try is the classic Governor Wood which produces beautiful sweet and juicy, golden-yellow fruit with a red blush. Introduced in 1842 this cherry is still prized for its abundant crop of delicious fruit. How about a sour cherry like Montmorency? This heirloom dates back to 300 B.C. but it was the French colonist who first planted cherry pits along the Saint Lawrence River in the 1600’s. Michigan produces over 90,000 tons of this bright red cherry with yellow flesh and clear juice.

Here’s a win-win growing tip for cherry trees.  Birds love cherries as much as we do but if you prune your tree when young so it branches low on the trunk, you can harvest the lower cherries for yourself and let the birds take the fruit from the upper branches. 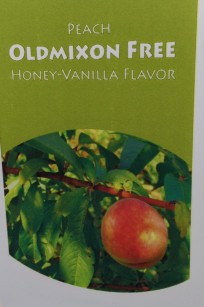 called Hemskirk which is considered one of the very best apricot varieties with bright orange, rich and juicy flesh. An excellent heirloom peach to consider is the Oldmixon Free. in 1807 cuttings of this peach were sent to Thomas Jefferson at Monticello. It’s stunningly beautiful while in bloom and the juice of Oldmixon Free peach is candy sweet.

What fruit tree varieties can you grow here in the mountains? Well, almost everything. Most of us get 700-900 chilling hours per winter.  What does that mean?  Well, many fruit trees, lilacs, and peonies need a  certain number of hours during dormancy where the temperature is 45 degrees or less.  You can give the plant more cold in the winter and it’ll like that just fine but not less.  Those in coastal Santa Cruz can grow Fuji apples as they require only 300 hours of chilling but not Red Delicious.  We can grow both.

Next week I’ll tell you about more luscious tasting plum, apple, fig and pear varieties you’ll want to grow. I’ll also give you tips on how and where to plant your new tree.