Orin Martin of the Alan Chadwick Garden on the UCSC campus is widely admired for his incredible knowledge and skills as a master orchardist, horticulturalist and teacher. I was lucky a couple of years ago when he visited a group of fellow designers and brought his favorite russet apples. Another time he brought a dozen different kinds of potatoes that we roasted, critiqued and thoroughly enjoyed.

The Alan Chadwick Garden was nothing but poison oak and chaparral in 1967 when Alan Chadwick first got his hands on it. Martin came to UCSC in 1969 as a literature major but was soon impressed with Chadwick’s work, preaching the gospel of treating the garden as a self-nourishing system. Together they worked the garden, building the soil and teaching others. 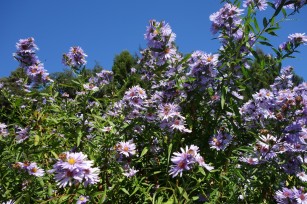 ntice program which teaches future organic gardeners and shares his knowledge in workshops like the Cover Crop class I recently attended.

Last week I wrote about how and why to plant cover crops. This is what to do next spring after they’ve done their magic in the soil fixing nitrogen.

Cover crops are plowed or skimmed off in late February to early April. Because it takes 3-5 weeks for the cover crop to break down so crops can be seeded or transplanted, it is often best to skim off the cover crop at the base of the plants and combine with straw or leaves to make compost. Previously made compost can then be applied to the surface. It is important to retain the roots and nitrogen-filled nodules in the soil. Take only the vegetative portion. 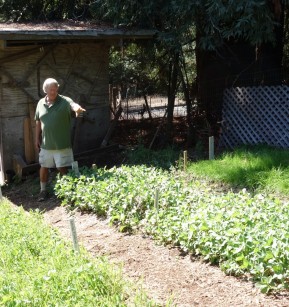 Another method is to skim the foliage with a weed wacker or mower chopping it into small pieces 1/4″ to  4″ long. You can then rototill this into the soil and allow it to decompose on its own. In about 2 weeks the material should be broken down to be unrecognizable as plant material before replanting.

If you are developing your soil to build organic matter and improve structure incorporate the cover crop at a more mature stage (half to full bloom) when it has a higher carbon content. The nutrients will be stored in the reservoir of humus and released slowly over a number of years.

On established soils where you want primarily to fertilize next spring and summers crops, incorporate the cover crop after skimming and chopping when it has just started to flower as it decomposes quickly at this stage.

The Chadwick Garden fertilizes its established fruit trees by simply cutting down the cover crop growing at their base with a machete at the 25% flowering stage. 4-6″ of wood chips are laid over the chopped up pieces and left for nature to decompose. That’s all their is to it. Martin explained that the garden used blood meal and the organic fertilizer, Sustane, during the first several years while the trees were becoming established.

Picking up a clump of grass sown just 2 weeks ago, Martin teased off the soil to show the vigorous, fibrous root mass. “This is why the riches soils of the world, the Steppes of Russia and the original Midwest prairies, are so fertile and are called bread basket soils”, he explained.

Plant a cover crop this fall and your soil will be richer for it.