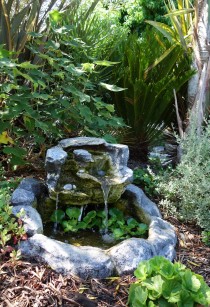 He told me that his was a one-of-a-kind garden, unique in such a small space and would I be interested in visiting some time? I love being invited to tour all types of gardens but I had an inkling that the garden of Rich Merrill, former Director of the Horticulture Dept. and Professor Emeritus at Cabrillo College, would be something special.

It was a beautiful morning when I arrived at Merrill's garden overflowing with flowering plants, small trees, edibles and water features. Many large boulders, surrounded by pebbles, caught my attention in such a small space. All part of the design to attract beneficial insects I was told. His organic garden is teeming with small beetles, spiders, predatory bugs, syrphid flies, parasitic wasps and lacewings. It's the ideal method of pest control, environmentally safe and free of cost.

While admiring his lovely garden, Merrill shared his knowledge of beneficials- from insects to birds to spiders to frogs and beetles. They are all part of the ecology of a successful habitat garden. I could barely keep up, writing down notes on my yellow legal pad as he weaved a story about how each of the elements in his garden contributes to its total health. I was never able to take one of his classes at Cabrillo College so this was a real treat. My own private class.

The wide diversity of plants in Merrill's garden provide moisture, shelter, prey and nutrition in the form of

nectar for carbohydrates and pollen for protein. His plants are "beneficial" plants because they foster beneficial insects. It just so happens  that many of these plants are also beautiful in the garden. Some of his favorites include composite flowers like sunflowers, marigolds buckwheat, scabiosa and santivalia or creeping zinnia.  They have flat  flower clusters with accessible landing platforms and small nectar and pollen to make it easier for insects to feed. They in turn eat the tiny eggs of the bad bugs in your garden. His is a complete ecosystem.

This 800 square foot garden happens to be in a mobile home park but any small space could be designed to be as beautiful and full of life as Merrill's. Most of my clients ask for a garden filled with color, hummingbirds, songbirds, butterflies and wildlife so I came away with lots of great ideas. 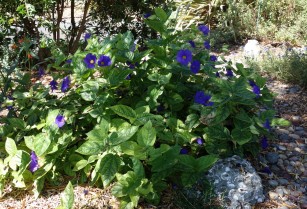 Once a teacher, always a teacher. Merrill gave me a handout he'd prepared for Renee Shepherd of Renee's Garden, explaining in more detail why he lets the broccoli go to flower to attract beneficials and why he allows aphids on his cruciferous vegetables to feed the beneficial insects when prey is scarce so they are on hand should he have an outbreak of bad insects that might ruin his flowers and plants.

As we strolled within a border of palms, olive trees, phormium, bottlebrush, Marjorie Channon pittosporum and cordyline, Merrill showed me his philosophy of right plant in the right place in action. Asclepias curassavica, commonly called Mexican Butterfly Weed, has self sown on its own in unexpected spots. One happened to come up next to the gorgeous blue thunbergia by the pondless waterfall making an awesome combination. Both monarch butterflies and hummingbirds enjoy the nectar.

Next to a red salvia, a red and white bicolor Rose of Sharon made it's home. Merrill lets all his plants intertwine and the pink flowering Heckrottii honeysuckle was already inching up into an olive tree. Other salvias in his garden include Hot Lips, San Antonio and San Jacinto. There isn't room to grow any of the larger salvias, Merrill explained. He swears he doesn't know where the brilliant blue one came from. Must be from the "fairy dust" his wife, Dida says he sprinkled over the garden to make everything grow so lush.

She loves flowers for fragrance and cutting so in several beds they grow gardenia, lemons, roses and alstroemeria among the alyssum which is a prime syrphid fly attractor. Several bird of paradise, obtained from different locales in the hopes one will be hardier grow beneath a tall palm.

Merrill grows only the vegetables that do well and are the most nutritious like kale, onions, garlic, broccoli and collards. He enjoyed growing cucumbers this year and has a large pumpkin in the making for his grandson. The rest he gets from the farmer's market. He had developed his own strain of elephant garlic which is actually a leek and has a milder flavor than garlic. I left his garden with a gift of elephant garlic and lots of inspiration.