In the spring we are surrounded by flowers of every color. It's our reward after the winter. My heart goes out to those gardeners in other parts of the country where snow still covers their perennial beds. The availability of winter sports only goes so far as consolation for all that white stuff. I've lived along the coasts of California my whole life and personally, I'd rather be sitting out in my garden enjoying the birds gathering nesting material than planning the summer garden on paper.  But I digress. Early spring flowering shrubs are getting my attention these days and here are a couple of varieties that you'll want in your garden, too. 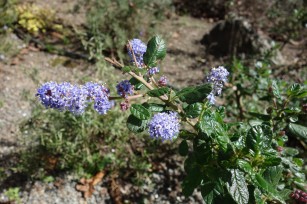 There's a ceanothus for every garden. You can't have too many of these workhorses in the landscape. They range from groundcover types for erosion control to shrubs for screens and accents. A new variety I've recently learned about from my friend and fellow Press Banner columnist, Colly Gruczelak, is called Celestial Blue. She planted several 2 years ago from 4" mail order sleeves and now they are 3 ft tall and 4 ft wide. In her sandy garden, home to her personal deer population, the flowers look like blueberry sherbet.

With a light fragrance, described as grape tart, this medium shrub makes a good screen or accent. This cultivar is probably a hybrid of Julia Phelps and Concha. A horticultural cultivar is simply a plant variety that's been selected specifically for gardens.  Celestial Blue flowers 9 months a year especially in the summer when it explodes with rich purplish blue flowers.

Ceanothus provide excellent habitat for birds and insects. They are good for attracting bee and fly pollinators and are the larval host plants for the beautiful Ceanothus Silkmoth. Ceanothus seed is readily eaten by many local birds. Even a deer resistant plant like ceanothus may have its new tasty growth tip-pruned in spring and summer. Think of this as natures way of producing a well shaped shrub, dense and compact.

Planting a ceanothus is an important step to attracting more birds and wildlife to your garden. 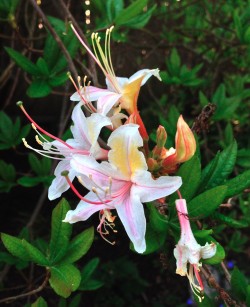 Want even more fragrance in your early spring garden? Plant a Western azalea, the common name for rhododendron occidentale. One of our most beautiful native shrubs in the Coast Ranges it grows also on the western side of the Cascades and Sierra Nevada mountains.

Western azaleas were described by explorers in western North America in the 1800's. The plant contributed to the development of deciduous hybrid azaleas in Great Britain such as the Exbury azalea.

If you're out hiking you'll know you are near a stand of these awesome shrubs by the sweet and spicy clove scent reminiscent of cottage pinks and carnations. Western azaleas are tolerant of our native serpentine soils which are high in iron and magnesium. Like many of our western shrubs, they have the capacity to resprout from the ground if the top has been destroyed by fire as long as the root system remains intact.

To grow Western azaleas in the garden provide routine moisture and keep the roots cool by shading the root zone with a deep mulch. Protect them from hot afternoon sun. Also to prevent late summer mildew provide air circulation by growing them in open areas not crowded among understory plantings or in dead air spaces under eves.

Give this lovely native shrub a 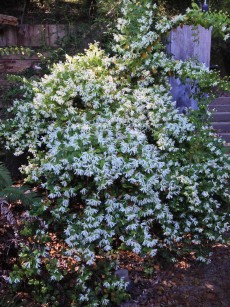 try. It's a wonderful addition to your garden. Visit some of them in Henry Cowell and Big Basin to see them first hand this spring.

My other favorite early spring blooming shrubs are Lily-of-the-Valley shrubs. I especially like a two-tone dark rose variety called Dorothy Wyckoff although those with pure white flowers are spectacular in the garden, too.
The white flowers of loropetalum chinense or Fringe Flower are even more showy than its pink flowering relatives.
Add a graceful, double butter yellow flowering kerria japonica to your landscape, too. Your spring garden will be a rainbow of color.