Imagine biting into that first apricot of the season. The juicy, sweet flesh the color of an orange sunset. Maybe a rich dark burgundy plum, sweet but slightly tart, makes you think of those summers when you picked them off the tree in your parents backyard. And then there are cherries, pears ,apples, peaches and nectarines to look forward to. Now is the perfect time to plant some of your favorite fruit trees while they are available in bare root. 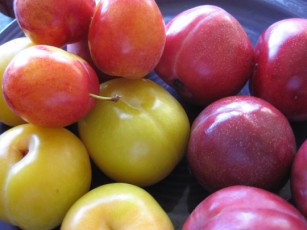 Growing fruit trees in the backyard has come a long way in recent years. Even in season those organic peaches from the farmer's market are expensive when you load up a big bag 'cause you just have to have a couple of each variety after trying the samples. Starting a home orchard or adding to your own edibles during bare root season is the way to go.

With a little planning you can have a prolonged harvest of tree-ripe fruit from a small space. Maximize the length of harvest by choosing varieties with different ripening times. Then train those fruit trees to stay small by pruning them in summer (winter pruning tends to invigorate trees), plant them close together or you can even plant several in the same hole. Small trees yield crops of manageable size and are much easier to spray, thin, prune, net and harvest than large trees.

The hard part is choosing which will be your next fruit tree. I've talked to several experts about their favorites. Here's what they told me.

Orin Martin of UCSC Farm and Garden loves apples. His highest praise goes to Cox's Orange Pippin, Golden Delicious, American Golden Russet and Mutsu. Plant these varieties and you could be eating apples from August through October. Did you know that at one time in American history russet apples were the most desired and wages were actually paid in cider made from russet apples?

Sheila from ProBuild told me she has seen a lot of interest in new introductions such a Pluerry, a hybrid she described as plum meets cherry. Bella Gold Peacotum has also been very popular since being introduced last year by Dave Wilson Nursery. This peach x apricot x plum fruit has slightly fuzzy skin like an apricot but with a mildly sweet flavor all its own.

Flavor Delight aprium has become a favorite because of its resistance to brown rot. It's 3/4 apricot, 1/4 plum with the clean tang of an apricot boosted by the sweetness of a plum. This variety is also recommended by Orin Martin.

Spice Zee Nectaplum is another hybrid that is getting a lot of buzz. I've heard it described as being "just about the tastiest fruit… ever eaten- very sweet, with an indescribably rich taste and aroma".  Being a gorgeous tree with deep red leaves in the spring that gradually become a dark green by mid-summer makes it ornamental in the garden as well.

Chris and Dave from Mountain Feed like many of the heirloom fruit trees. If a variety is older than 50 years it is classified as an heirloom. Does that apply to people, too? In addition to apples, Chris told me about his favorite pear, Belle Lucrative, which he described as an amazing French butter pear. This classic variety of 19th century France has a juicy, syrupy melting texture.

Plums are also high on his list of favorites. Luther Burbank varieties such as Elephant 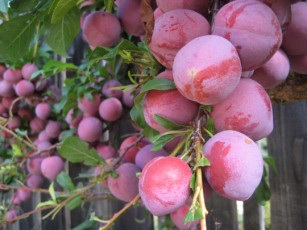 Heart, Beauty, Inca and the ever-popular Santa Rosa are easy to grow and need very little care once established.

Bare root trees need to be planted while they are still dormant. Stone fruits such as apricots, peaches, plums and cherries are going to start waking up first so they are best put into the ground soon. You want your tree to start developing its new permanent roots in its permanent home. Fruit tree like pears and apples will be dormant for a while longer so you can wait a bit longer to plant them.

Take advantage of bare root season to add more edibles to your landscape. A smart design can make your garden look beautiful while feeding your family.