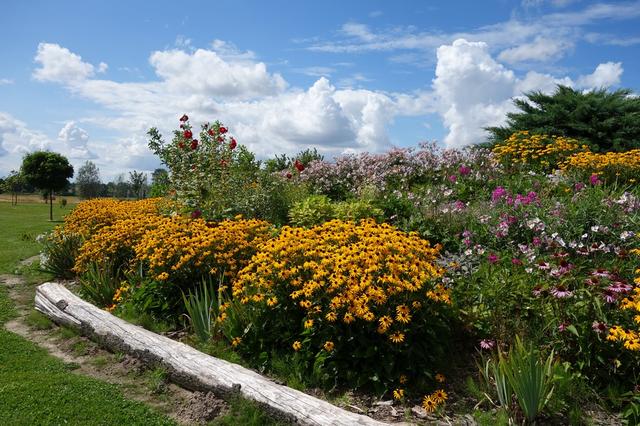 Poland is a country nearly as big as California so it stands to reason that gardening styles would vary over such a large area. Settled as a recognizable entity about the middle of the 10th century, Poland has had a lot of time to develop although it's borders have fluctuated with Lithuania, Belarus, Ukraine, Slovakia, Czech Republic and Germany,

Mostly I saw neat, red or green roofed houses surrounded by a large flower garden, a few apple trees and a robust vegetable garden in full production. Whether the house was brick, mortared granite, wood or stucco everything was tidy around the property with nary an abandoned car to be seen. Brightly colored ivy geraniums tumbled from boxes attached to windows. Sometimes the vegetables were grown in larger plots for sale and these areas staked with wire strung tightly between the posts. Every 10 feet or so pieces of plastic bags attached and these waved in the breeze. Surprisingly  this keeps the wild boar, roe and red deer at bay, I was told. 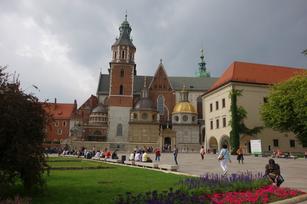 different style of landscaping. Unlike the wild perennial flower gardens I had seen, these gardens were austere with square lawns surrounded by an arborvitae hedge. In the middle of the lawn were planted 8-12 dwarf conifers planted like chess pieces on a grid. Everything was green in these yards. The house was usually 2 storied with very small porch and no flowers.

Whatever the style of house, the Polish people love their dogs. I saw mostly small dogs with the occasional German shepherd but all were well cared for and anxiously awaited their owners return if left behind in the yard.

In the southeastern part of Poland the farms are smaller and more numerous.  Not being able to afford baling tractors, hay is stacked into tall piles and sometimes covered at the top with plastic for rain protection. The soil here is a mixture of fine sand. clay and silt. Called loess it is rich in minerals. Poland grows most of the apples for concentrate for all of Europe with the help of this soil.

Red currants, blueberries, blackberries and raspberries are commonly grown. Fields of sunflowers surround farmhouses.  Brightly colored bee hives find a home in many orchards. Pigs are kept in barns but dairy cows graze in the meadow. Geese, chickens and goats are common.

Here's what I learned in Poland.  Be sure to give swans who are protecting 7 young, fluffy grey cygnets a wide berth while kayaking down a river. Tobacco fields are beautiful when covered with spikes of pink flowers. Millions of migrating geese, swans, ducks and waders stop by the northeast corner of Poland in May .A quarter off all migratory birds who come to Europe for the summer breed in Poland.  A White storks will eat anything that fits in its mouth. Cobblestone streets can be made from rounded cobbles, small squares of granite set in beautiful patterns, brick, basalt or random pieces of stone. Gas costs about $7.00 per gallon although it is bought by the liter. Around any hole with a worker at the bottom there usually are several in orange vests standing at the top just watching. 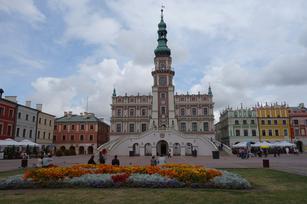 I also learned that Polish people eat very large breakfasts consisting of many types of cold cuts and sausage, several kinds of cheese, many styles of eggs, bread, rolls, butter, jam,  tomatoes, cucumbers, pickles and salad. Dairy farmers in small villages can use a bicycle to bring two cans of fresh milk to the collection barn while others use small carts, a tractor or a horse. Close to the Belarus border, the last stand of original forest in all Europe is thriving and is home to bison, wild boar and the occasional lynx, bear and wolf. The last Russian tsar in the 1800's had most of the predatory animals killed so he could hunt more bison when he came to his summer castle. I did see a red fox checking out a vole early one morning and fresh badger and marten tracks in the mud on the trail.

Poland has more than 3500 species of mushrooms and hunting for them is a traditional past time. I enjoyed many soups and other recipes made with wild mushrooms. Two million private farms grow most of the potatoes and rye for Europe and is one of the worlds largest producers of sugar beets. and triticale, a self-pollinating hybrid of wheat and rye, leading Poland to be called the future breadbasket of the European Union.

I'd love to go back to Poland.  It's a beautiful country rich in history and the gardens are spectacular.