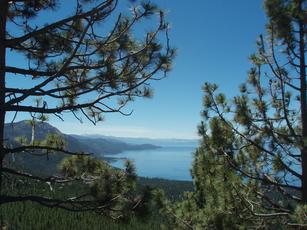 Boy are we spoiled living here like we do. Our climate is just cold enough in the winter to grow delicious fruit that likes a bit of chill but not so cold that we're forced inside during those months. Our summers are warm and long allowing vegetable gardens to thrive as well as people.

Not so at Lake Tahoe where I recently spent some time. Here cold winters make snow sports reign supreme and summer brings a short growing season. Locals told me that their lilacs are just now blooming, the peonies are in tight bud and many gardeners don't bother growing vegetables. Late snow often in June and early snow sometimes in late August make gardening in the Sierra so much more difficult.

I visited a beautiful nursery in Tahoe City, the Tahoe Tree Nursery to get a feel for what's popular in these parts. This destination nursery is landscaped for weddings as well as bringing in perennials, trees and shrubs to sell from their growing grounds in Loomis in the central valley. Quaking aspen grew in lovely stands providing shade for ferns, hostas and ligularia.  Favorite perennials are echinacea or cone flower and were offered in all the hot new colors: Hot Papaya, Raspberry Truffle, Marmalade, Primadonna White as well as the beautiful magenta standard, Magnus. Many varieties of coreopsis, stachys, lonicera, rudbeckia, kniphofia and hardy geranium are also popular. Rugosa roses do well in this climate also.

On a hike to Shirley Lake in the Squaw Valley area the wildflowers were in full splendor. Fields of

Indian paintbrush, mules ears, penstemon, lupine, phlox and delphinium and Mariposa lily covered the slopes. Early summer starts off this areas growing season and everything was lush with new growth and color.

In our part of the world, our early wildflower season is almost over but perennials and flowering shrubs are at their peak and need a bit of attention about now. Here are some tips of what to do in the garden in July.

Make sure vines have support. Some grow so fast that if you look away for a week they become a tangled mess. A little maintenance goes a long way in this department.

Trim back early flowering perennials to encourage the next flush of blooms.

Check ties on trees to make sure they aren't cutting into the bark.

While your out in the garden, take some cuttings from favorite plants like roses, hydrangeas, geraniums, trumpet vine, blackberries, lavatera and salvia. Softwood cuttings are taken during the growing season from relatively soft flexible growth.  Gather 8-12" cuttings early in the day. Discard flowers, buds and side shoots. Then cut the stem into 3-4" pieces, each with at least 2 nodes. Keep track of which end is the bottom and dip in rooting hormone. Poke holes with a pencil in a rooting medium such as half peat moss or potting soil with half perlite, vermiculite, or sand or use perlite or sand only and insert cuttings. Enclose each container in a plastic bag to maintain humidity, opening the bag for a few minutes each day for ventiliation. Place the containers in bright shade.

Some cuttings take 4-6 weeks to root while others take longer. Once they have taken root and are sending out new leaves, open the bags. When the new plants are acclimated to open air, transplant each to its own pot of light weight potting soil.

Enjoy your garden even more this summer by rooting your own plants for yourself, to give away or trade. This is how early settlers filled their gardens, too.