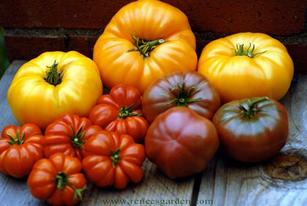 The spring sun has started to warm the soil. I'm already having visions of eating ripe, luscious tomatoes later in the season. I have several friends who are tomato fanatics and share their trials, tribulations and successes with me. Every year brings new hope to a gardener who is excited to grow the best tomatoes ever.

One friend who loves her tomatoes is going to finally start a gardening journal in a binder. With a page devoted to each of her tomatoes, complete with color pictures, seed grower descriptions and space for her own notes, this year her tomatoes just can't fail to be delectable.

During the last couple of years, cool spring and early summer weather  took its toll on tomato production and taste so this year she is trying some different types for cooler climates. Many of these tomato varieties originate from cooler growing areas in Russia and other northern growing areas. She chose from Alaska, Amber Colored, Anna Russian or Azoychka varieties that are all Russian heirlooms,  Alicante from England or Black Krim originally from the Isle of Krim on the Black Sea in the former Soviet Union. Of course, Black Cherry, the only true black cherry tomato, is on the list. With a description of "irresistibly delicious with sweet, rich, complex, full tomato flavor that bursts in your mouth" , who could resist?

This tomato aficionado planted out her early "tried and true" varieties that she started from seed in the ground the last week of March in Wall O' Water season extenders to keep them warm. Night time temps in March were pretty cold so they needed all the help she could give them. The regulars include Early Girl, Stupice, Carmello and Sun Sugar.

New seedlings she bought and recently planted include Purple Cherokee, Paul Robeson, Northern Lights, Black Plum, Green Zebra and Sunset Red Horizon. She is also trying "a Red Brandywine that didn't do well last year but if we are lucky enough to have a warmer season if may do better".  She is "looking forward to the addition of new colors ( green striped, black, purple, marbled orange and red)  and hoping to enjoy the nuances of flavor that accompany them".

Renee's Garden Seeds has lots of great tomato varieties available online at www.reneesgarden.com. One is a colorful trio of treasured heirlooms that consists of Black Krim, the glowing orange Sweet Persimmon and traditional Italian Costuluto Genovese. She offers a total of 13 varieties including  heirloom Camp Joy cherry as well as everybody's favorite Sungold. For containers, there's Super Bush and for that burger, Big Beef Beefsteak tomato.  I'd like to try a Chianti Rose or the Italian Pompeii plum tomato.

According to Renee's website, tomatoes are native to South America and were carried to Europe in the 1500's by the Spanish conquistadors. Southern Europeans began enjoying their fruits early on, but in England they were viewed with suspicion and grown as ornamentals only as they are members of the nightshade family. In this country, Thomas Jefferson grew tomatoes to eat although most Americans didn't start cultivating tomatoes for the kitchen until the end of the Civil War.

Hope springs eternal for a tomato grower. What tomatoes are you growing this year? What were your best producers in years past? I'd love to hear from you as the season progresses and I'll share this with readers later in the summer or early fall.