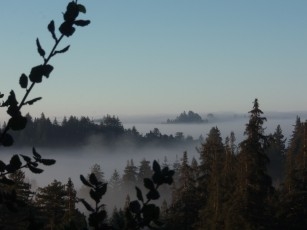 Gardening is a tricky thing up here in the Santa Cruz Mountains. Recently I got an inquiry from a new resident to the area. She moved up here last year from the west side of Santa Cruz. Not that far away on the map. A world of difference in soils and climate. She lamented, "I Can't believe the difference in the soil here. I lived a mile from the beach and now that I'm miles away, I have the sandiest soil ever."  Welcome to our wonderful world.

Our soils were formed from marine deposits and from molten rock emerging from the earth's crust. Areas underlayed with shale creep and slide during wet weather. Serpentine and granite soils crisscross the mountains.
What's a gardener to do?

It helps to know which zone you garden in. So here's a review. Sunset Western Gardening Guide is confusing as our area has many microclimates and their map is not detailed enough to reflect this. They even show Felton as being on a ridge top instead of on the valley floor. Hopefully, the new Sunset book out this month will be more accurate. Here are some tips to help you determine which zone you live in.

Zone 16 – those who live up off the valley floor but below ridge tops live in this "banana belt". Pasatiempo also falls in this thermal zone.  Light frost can occur during the winter but mostly the winter lows in this zone stay above freezing. Lucky you.

Beside the zone you also need to note how much sun or shade you get during the growing season- April through September. Most plants can survive without sun during the winter as they are either dormant or semi-dormant. It's those areas that get a blast of sun from about 11 am to 4 pm in the summer that you need to plan more carefully for.

There may also be microclimates on your property. Areas in your garden that are several degrees warmer than other spots. Maybe a brick wall or the top of a slope from where cold air drains generates a few extra degrees.  Planting a citrus at the top of a slope that drains away the cold will make your tree much happier than if planted in a low open area.

If you have questions about which zone you are in, email me and I'd be happy to help.