A new year in the garden. I'm already starting to make journal entries for January. Not much to shout about in the weather department. We've had dry Decembers before but if January turns out to be the start of 6 weeks of Caribbean-like weather like last year we'll never catch up. 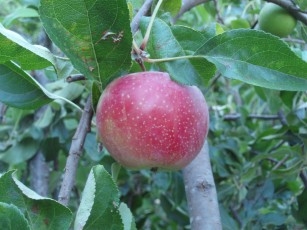 The weather affects how things grow as much as the soil that plants grow in. Remember the cool spring and summer we had while you waited for your tomatoes to ripen? I was just looking at the weather forecasts for 2010 that the Farmer's Almanac predicted. Last May when I first wrote about them they were way off for the first half of the year and at best were hit and miss for the latter half. October did bring rain for us as predicted but they hedged their bets for November calling for "bands of showers" off and on during the month. December for us brought lots of frost and a heavy wind storm.  Although the frost was predicted by the Almanac, I didn't see any "light to moderate rainfall" in December. I put my trust in the satellite map, internet weather sites and my own common sense to judge when to start planting, pruning and transplanting for the season.

This year I'm going to start off right by noting on my calendar at the beginning of each month just what I need to do to ensure a happy, healthy garden.

Here are the tasks to do in the garden in January:

And here are the tasks you should not do in January:

As always, if you have any questions, feel free to email me. I'd love to hear from you.