Fresh from a day spent among the spectacular world of succulents I’m excited about using these unique plants in new ways. Succulent Gardens in Moss Landing hosted a day of speakers, tours and demonstrations showcasing these  fabulous, unearthly-looking plants. I’ve always liked succulents grown along a walkway, around accent boulders or tucked between perennials. Now I’m creating awesome vignettes in containers that I can move under an overhang to protect from excess rainfall and frost if necessary. There are so many impressive varieties to choose from. Here are some of my favorites that I enjoyed on the tour.

Many showy succulents need only a bit of protection during our winters.  Aeonium decorum Sunburst is one of the showiest species with spectacular variegated cream and green 10" rosettes. This plant  grows 2′ tall and looks terrific with black Voodoo aeonium in a pot. Sunburst is hardy to 28 degrees while Voodoo will go down to 32 degrees. Aeoniums do so well in our climate as they come from Arabia, East Africa and the Canary Islands where winter rainfall is the norm.

Aeoniums propagated from tissue culture are now affordable. There was a time when a 2" seedling cost upwards of $100. Tissue culture involves taking the cells from the core of the plant and growing it in a sterile medium like agar. The resulting plants are exact copies of the mother plant and mature quickly. 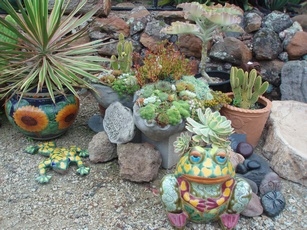 wet winters. After Glow is frost tolerant and looks to be painted with florescent paint. There are spectacular hybrids being developed every year. These are not as hardy as the traditional hens and chicks but well worth the effort to find a place where they can survive a freeze. Frilly Mauna Loa sports turquoise and burgundy foliage while echeveria Blue Curls looks like an anemone in a tide pool.

Aloes from South Africa and Arabia are old world plants. Many like the medicinal aloe vera are frost tender but some, like the tree-like aloe plicitilis, are hardy down to 25 degrees and look great either in the garden or in pots.  Did you know the Egyptians used aloe in the mummification process or that there are no known wild populations of aloe? In South Africa, an aloe called ferox is used in the same way as aloe vera for burns and stomach problems. This variety is hardy down to 20 degrees and blooms in January.

When potting succulents in containers, be sure to use a quality potting mix as good drainage is essential. There are special succulent mixes available but succulents are forgiving as long as the soil drains freely. A great tip I got from Debra Baldwin, author of Designing with Succulents and Succulent Container Gardens, is to add Dry Stall to regular potting soil. Dry Stall is a horse bedding product made with pumice. It is similar to perlite although heavier and less expensive.

Her recipe for succulent soil mix differs with the size of the leaf. For fat, juicy leaves use 75-90% pumice of perlite to potting soil. Fine-leaved varieties thrive in a soil mix of 25% pumice to 75% soil and all the rest get a mixture of 50/50. Don’t add gravel or clay shards at the bottom if planting in a container as this impedes drainage. It work best to fill the entire pot with soil, top to bottom.

Because succulents use little water they are easy to care for. If you hate the idea of having to water after you get home from work, create the garden of your dreams with succulents.