Few things can compare to walking on a scenic woodland trail lined with wildflowers.  Now that it’s officially spring I recently took a hike in Quail Hollow Ranch County Park to see what I could find. One of the unique aspects of this park is the number of rare plant and animals that make this valley their home. It didn’t take long to find the threatened Silver-leafed manzanita although it wasn’t blooming yet. The sandhill ecosystem where it grows among ponderosa pine is found in Santa Cruz county and no where else in the world.

Once upon a time, this land was under water, part of an ancient ocean, which uplifted to form the Santa Cruz Mountains about three 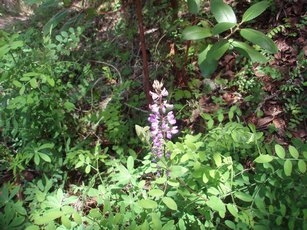 million years ago. According to the Santa Cruz Department of Parks, the silt, sand and mud that had been deposited in that shallow sea later turned into the shale, sandstone and mudstone that make up Quail Hollow today. The diversity of this special place is mirrored in the patchwork of 15 habitats that are located in this small, secluded valley. Mixed evergreen forest, redwoods, grasslands, and a pond with surrounding riparian ecosystem mix with hot, dry chaparral and sandhill environments. The sandy soils here have eroded from the Santa Margarita sandstone and serve as an aquifer for the San Lorenzo Valley.

Hiking the trails among the blooming mimulus ,large-leafed lupine, Western Hound’s Tongue, manzanita and ceanothus made me think about the impact of our own gardens on the populations of native plants like those here.
Are we contaminating the native gene pool if we plant a mimulus, for instance, from southern California or a hybrid in our own garden?

The genes of all native plants have been sorted out over a very, very long time scale and they’re finely tuned to their environment. When you introduce an exotic gene – exotic meaning not of this place- it could be from a neighboring county, we don’t know the long term effect they’re going to have. If you live next to a wild population of a certain plant, like ceanothus, you should try to plant locally collected and propagated plants and seed. They are harder to find but local growers do collect seed and identify the source. On the other hand, ceanothus is a fire-dependent species and does not regenerate from seed except in the presence of fire or some other disturbance. If in doubt you could substitute a drought tolerant Mediterranean shrub that wouldn’t interbreed with local native plants.

It is probably not a problem for the home owner who lives in a neighborhood and wants to plant a couple of those cool, new sticky monkey flower hybrids in his own garden. If they do interbreed with the native population, in time whatever genetic pollution there is will probably die out. The home gardener is not planting fields of one type of plant that will interfere with the wild population.

There are many philosophies about planting California natives. There is no one-size-fits-all when it comes to this subject.  One thing for sure, we all want to preserve our wild areas like Quail Hollow.