What would you plant if you lived in a flat area with very poor drainage? Where the landscape is shaped by limestone or dolomite bedrock? Where the shallow soil is filled with carbonate rock?  Where there is limited surface water and no above-ground rivers?  Where lakes and swamps are present, the water is marshy and not palatable for drinking? Where you have two seasons-  6 months of rain and 6 months dry.  Oh yeah, did I mention you get 100" of rain during the wet season?

Last week I talked about the gardens and plantings I encountered in the mountain areas of Chiapas in southern Mexico. I’m now in the heart of the Yucatan peninsula in eastern Mexico where extensive underground rivers collect in thousands of deep, cave pools called cenotes. More than 3000 sinkholes of  mineral-rich, clear, turquoise water dot the landscape. The held the cenotes sacred, believing them to be entrances to the underworld.

Short and tall tropical jungles are the predominant natural vegetation although the forests are suffering from extensive deforestation. Orchards of papaya, maize, bananas, sweet and sour oranges, mandarins and limes are planted in cleared areas of the jungle.The soil is rocky and requires a lot of preparation before an orchard can be planted.  It is interesting to note that oranges were originally brought to the area from Spain in the 1700’s.

Over half of Mexico’s resources are found in the Yucatan peninsula. Oil, plastics , bananas, mango, sisal are just a few of the exports of this area. In the 1600’s Captain Morgan repeatedly attacked ships off Campeche on the Gulf of Mexico. The ships,heading back to Spain, contained not gold and silver from Mexico but cocoa, corn, citrus and coconuts that were unknown in Europe.

Perhaps the mild, tropical weather contributes to a lifestyle where people decorate the area around the house more here than in the mountain regions.  Bare dirt is swept clean of fallen leaves and debris. In the mountains, the residents planted more edible crops rather than ornamental plants. Here in the Yucatan, flowers and container plants are common. 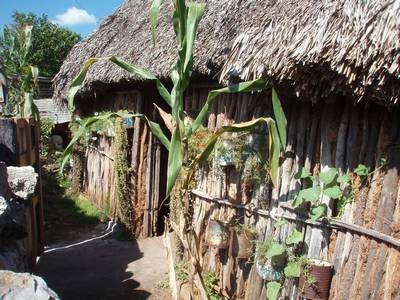 Many dwellings are made of gypsum plaster and stucco as they have been since ancient times.  Merida is even called ‘the white city" due to the color of this common building material. In the villages, small branches are imbedded in the plaster for strength and thatched roofing is most often used as it has been for centuries. This is an effective way to build weatherproof roofing with materials at hand. As experts in this type of roofing they know the best reeds are harvested during the winter as standing dead material, ensuring that another reed plant will grow in it’s place the following year for maintaining the roof.

Loquat trees and coconut palms shade houses from the sun and spiky sisal agave plants are planted as effective barriers around the perimeter of the yard. Sugar cane and corn crops are typical. Front yards are small but back yards are very large filled with tables, chairs, hammocks and a clothes line. 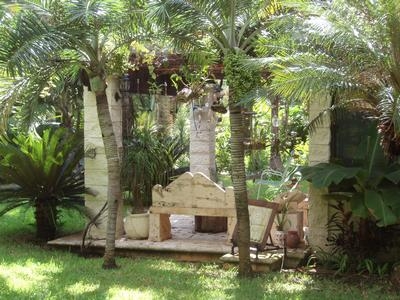 utterflies. Fried pig skins are very popular and some side yards were used for a 50 gallon drum of hot oil to produce this treat. I have to confess, I passed after seeing the product before the cooking process.

People of the Yucatan peninsula from Merida to Celestun on the Gulf of Mexico to the shores of the Caribbean enjoy their gardens whether they live in small homes in rural areas or in more traditional residences in the city. My trip was amazing and I’ll never forget the gardens of the Maya people.